Rapid Application Development (RAD) tools and platforms offer agility and enable development teams and professional developers to jump start quickly onto a Project. Use of RAD methodology reduce the time and effort required to:
a) evaluate the technology stack and frameworks
b) design and implement boiler-plate CRUD code, SQL queries and UI-based forms
c) prototype and test with production data very quickly

In the past, the code generated by RAD tools in comparison with hand-written code was considered to be not readable, not maintainable, and believed to offer very few customizations and abstractions. However, frameworks and technology stacks have matured over time, moving a lot of heavy lifting from developers and offering better tooling support. With the current generation RAD tools and platforms leveraging modern technology stacks, there is no noticeable difference between generated code and hand-written code.

WaveMaker Studio incorporates advanced code generation techniques with the right abstractions and design patterns, rather than generating code that just works. WaveMaker Studio provides niche application architecture by standardizing on open-source Application Stack, using some of the best-of-the-breed libraries like Spring, Angular, Hibernate, and Bootstrap. Open standards application stack enables developers to freely distribute and modify the generated source code and doesn't have any vendor lock-ins into the platform.

No platform lock-ins for built applications

While most of the Rapid Application Development platforms tend to lock in applications within their own platform, like Force.com, BlueMix, or Mendix, WaveMaker takes a radically different approach to use open-standards-based generated code and 3rd party services integration through plug-n-play REST API based contracts. Developers have the liberty of moving the application built from the platform and deploying it in their own custom infrastructure.

Code generation with no trade-offs in design or performance

Let us build a CRUD-based application to take a closer look at WaveMaker Studio-generated code for front-end and back-end artifacts. The following figure shows a simple application page design with separate sections for header, left navigation, and content. 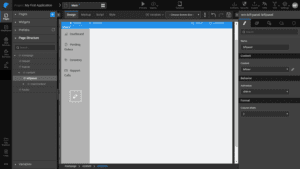 The content section has a 2-row grid layout, each row having a different number of columns and widgets placed within. The generated markup has separate sections for header, topnav, leftnav & content area, and for each widget, its corresponding Angular directive gets generated. WaveMaker provides a comprehensive Angular-based open-source widget library, and the documentation is available here.

For each designed web page, a well-organized set of artifacts are generated for HTML, Javascript, Stylesheet & property files for variables defined within the scope of the page. Any event handling code or custom client-side logic should be written in the page-specific javascript file and the HTML markup can be edited directly by using the appropriate widget directive syntax.

WaveMaker Studio's javascript editor provides code completion and IntelliSense features to search and identify the available bindings within the scope.

Spring framework is widely used by Java developers and offers a very flexible architecture, extensible, and provides cleaner abstraction. WaveMaker Studio provides the right balance between generated code and any runtime libraries used, giving maximum control to the developer to customize and change the generated code.

In the design mode, Studio supports hot deployment of changes and completely relieves developers from compilation and code-generation aspects. Internally, Studio uses the Maven-based application build process, which makes the necessary application runtime dependencies to be included in the POM file and provides an option to export the entire Studio-built application as a Maven project.

WaveMaker Studio provides a very comprehensive domain model or schema designer, which supports dialect mappings to the underneath database and provides modeling the relationships as well.

Domain model objects are auto-generated from the database schema, with JPA annotations and respective database mappings. Getter and Setters are auto-generated with the corresponding column mappings, relationship, and join column mappings. Domain model objects are plain POJOs without any dependency on the WaveMaker runtime library.

Separation of layers for extensibility and integration

Domain model, service, and controller layers are separated out in the generated code for extensibility and readability. For every domain model object, a Service class is generated, which provides CRUD operations and query execution with complete support for pagination, query filters, etc. Service class depends on WaveMaker runtime library, which is open source and provides the persistence runtime logic based on Hibernate.

API-centric approach as the first step to application design

For every domain model object, the web service controller is generated based on Spring REST, with appropriate path mappings. For database services, the REST controller exposes CRUD operations and query execution methods automatically and the visibility of these APIs can be configured through API designer.

WaveMaker Studio-generated code incorporates the best practices followed by professional Java or Javascript developers and guarantees the best code quality, maintainability, and extensibility for enterprise application use. With most of the application back-end code being auto-generated, developers can now focus more on User experience, custom business logic, and any other 3rd party integrations.

In a follow-up post, we'll discuss the extensions provided from an application developer's perspective for customization and tweaking the generated code. We will discuss details related to form validation, styles and themes, Spring bean customization, and application security integration. Stay Tuned!